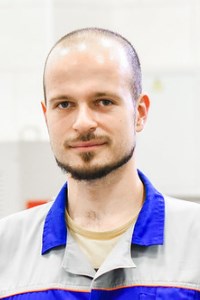 PhD in engineering, senior researcher at the Inorganic Nanomaterials Laboratory

PhD in engineering, senior researcher at the Inorganic Nanomaterials Laboratory

For the first time, AlSi10Mg/BN composites were obtained through the use of additive technologies (selective laser melting). The structure and mechanical properties of the materials obtained were studied. The justification of special aspects of the morphology of composites using theoretical modeling methods was proposed. Thus, it was shown that thin (up to 300 nm thick) h-BN plates were uniformly distributed in the alloy matrix. The formation of a thin transition layer enriched in nitrogen was observed at the AlSi10Mg/BN section boundary. A detailed analysis of this transition layer allowed to reveal that as a result of interaction of the matrix and h-BN particles, aluminum nitride nanoparticles are formed at the surface of the later. It was shown that AlN nanoparticles densely populate the h-BN surface, which accounts for the formation of the transition layer. The results obtained, in particular, the predominant formation of the secondary phase (AlN) at the AlSi10Mg/BN section boundary may be used for further development of selective laser melting for composite materials production [JALCOM 859 (2021) 157756].

It was shown, both experimentally and theoretically (by DFT method), that the chemical state of the support surface has a significant effect on the content of catalytically active nanoparticles. It was established, both experimentally and through the use of theoretical modeling, that the optimal content of boron oxide on the surface of h-BN formed during the preliminary heat treatment may significantly increase the concentration of Ag nanoparticles, which leads to an increase in the catalytic activity of the material in the oxidation of methanol reaction. Pursuant to the DFt theory, a mechanism for the oxidation of methanol on Ag/BN structures was proposed, and energy barriers of its various stages were calculated [Catal. Sci. Technol. 8 (2018)

For the first time, the catalytic activity of the Ag/BN system in the oxidation reaction of carbon monoxide was demonstrated. The effect of the synthesis environment on the tendency of nanoparticles of noble metals and carriers to agglomeration was studied. The formation of intermediate structures based on polymer molecules and silver nanoparticles was shown. Preliminary studies of activation schemes for heterogeneous catalysts based on defect-free h-BN nanostructures showed a greater effect of the oxidative activation stage (exposure in an oxygen-enriched environment) as compared to the reduction (exposure in a hydrogen-enriched environment) on the catalytic activity of the material in the CO oxidation reaction [J. Catal. 368 (2018)

Nanostructured materials (Ni0.2Cu0.8)/BN were obtained, and their high catalytic activity in the reaction of methanol reforming and oxidation of carbon monoxide was demonstrated. Compared to other types of nanocatalysts, methanol reforming is accompanied by the formation of a small amount of carbon dioxide, while carbon monoxide was not observed at all. Based on the deliverables of the work, an article currently under review with the [Chemical Engineering Journal] was drawn up.

Resulting from the comprehensive study of the evolution of the structure of heterogeneous Ag/BN structures, it was found that the formation of silver nanoparticles over h-BN surfaces is accompanied by intermediate stages of the formation of nanocomposite polymer structures with Ag particles, as well as silver acetate. It was shown that these structures may be effectively used to control the content and size distribution of silver nanoparticles on the h-BN surface during low-temperature (up to 150°C) annealing. Varying the duration and temperature of annealing may also be used to control their morphology. It was also shown that the intermediate layer between the metal particle and the substrate plays an important role in increasing the catalytic properties of the Ag / BN system in the CO oxidation reaction. So, with the same content and size distribution of silver nanoparticles, enhanced properties are demonstrated by heterogeneous Ag / BN nanostructures containing a thin Ag-O-B transition layer [Catal. Sci. Technol. 9 (2019)

It was established that an increase in the content of silver nanoparticles on the surface of h-BN by their formation by the polyol method is nonlinear. Thus, for a specific ratio of system components, there is an optimal synthesis time that allows the formation of the largest amount of silver nanoparticles several nm in size on the h-BN surface. Exceeding this time leads to an increase in the concentration of silver on the h-BN surface due to the growth of particles and does not contribute to an increase in the catalytic activity of the material. For the first time, the catalytic stability of the Ag/BN system in the CO oxidation reaction was studied. It was found that the high catalytic activity of the material persists for a long time, and its decline is associated with the partial sintering of the smallest silver nanoparticles [ChemCatChem, 12 (2020) DOI: 10.1002 / cctc.201902257].

Biodegradable polycaprolactone nanofibers were obtained by electrospinning, and their surface functionalization was carried out in order to improve their biocompatibility and bioactivity. Two approaches were used to modify the surface: (i) a COOH-containing polymer was applied to the surface of nanofibers using plasma copolymerization at atmospheric pressure of CO2 and C2H4, and (ii) PCL nanofibers were coated with a multifunctional bioactive nanostructured TiCaPCON film during magnetron sputtering of a TiC-CaO-Ti3POx target. TiCaPCON coated nanofibers showed improved adhesion and proliferation of MC3T3-E1 cells and promoted the formation of a Ca-based mineralized layer when immersed in a solution that mimics the internal environment of the body. Thus, coated nanofibers may be considered as a promising material for bone tissue regeneration. Plasma polymer nanofibers demonstrared an improved adhesion and proliferation of IAR-2 cells, indicating their high potential for skin repair and as wound dressings [Nanomaterials 9 (2019) 1769].

The effect of Ta on the microstructure and corrosion fatigue of the Ti-18Nb-14Zr metastable biomedical alloy was studied for the first time. The results of electrochemical and mechanical tests showed that the fatigue life of the alloy with the addition of Ta was significantly longer than that of the Ti-18Zr-14Nb alloy. The increase in resistance to fatigue failure is accounted for by the tendency of the alloy alloyed with Ta to passivation [J. Alloys Comp. 748 (2018)

New shape memory alloys Ti-18Zr-14Nb, Ti-18Zr-13Nb-1Ta, Ti-18Zr-12Nb-2Ta and Ti-18Zr-11Nb-3Ta (at.%) were manufactured by vacuum arc remelting, and subsequent thermomechanical treatment (TMT) was applied. Alloys with a subgranular structure with the structural element size of  and superelasticity at room temperature were obtained. During cyclic mechanical tests the following tendency was discovered for all alloys: during the first cycles of loading-unloading, the mechanisms of plastic deformation and stabilization of martensite under the action of stresses predominate, and after that the mechanisms of β⇄α" transformation become dominant and the deformation mechanism passes from elastoplastic to superelastic [Mater. Sci. Eng. A 702 (2017)

A method for the surface functionalization of BN nanoparticles with targeted legends for their targeted delivery to tumor cells was developed [J. Phys. Chem. C 121 (2017) Phys.

Number of articles on Scopus —31.