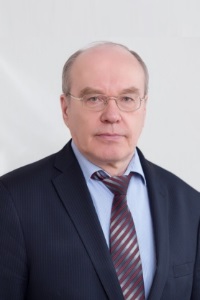 Doctor of physics and mathematics, professor, leading expert at NUST MISIS, chair of the Condensed Matter Physics Department at ChelSU

Doctor of physics and mathematics, professor, leading expert at NUST MISIS, chair of the Condensed Matter Physics Department at ChelSU

Within the framework of the phenomenological theories of Landau, Bean-Rothbell, Kittel, all possible phase diagrams of structural and magnetic phase transitions of ferromagnetic Heusler alloys were theoretically obtained for the first time.

A prototype of a magnetic cooling device was created.

The theory of coupled electromagnetic, spin, elastic and relaxation oscillations in magnets in the field of magnetic and orientational phase transitions was developed.

The theory of the giant magnetostriction effect in ferromagnetic Ni-Mn-Ga alloys with shape memory effect due to the rearrangement of the magnetic and martensitic domains and the shift of temperature of martensitic transition under the influence of an external magnetic field was developed.

The reflection coefficient of electromagnetic waves of microwave and radio frequency ranges from the surface of media containing magnetically ordered substances was studied. It is shown that in such substances it is possible to control the reflection coefficient of electromagnetic waves from zero to one in a wide frequency range.

A microscopic Hamiltonian is proposed for the theoretical description of magnetic, magnetostructural and magnetocaloric properties from the first principles and by the Monte Carlo method in Heusler alloys. With the use of Hamiltonian, the magnetic, magnetostructural, thermodynamic and magnetocaloric properties of Heusler alloys were studied.

A statistical model of phase transformations in ferromagnetic alloys with a shape memory effect and a giant magnetocaloric effect was created.