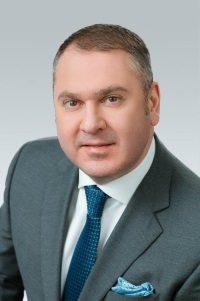 Doctor of economics, professor at the Department of Economics, director of the Roments College of Economics & Industrial Management, NUST MISIS

Doctor of economics, professor at the NUST MISIS Department of Economics, director of the Roments College of Economics & Industrial Management

2005 — present: professor of the Department of Economics, NUST MISIS. He gives lectures on the world economy and macroeconomics. Academic title: associate professor (2010). He taught under the Executive MBA Program at the Higher School of Economics (Moscow).

Rostov State University. PhD in economics. Thesis topic: “Improving the efficiency of exporting steel products of Russian manufacturers in the context of globalization”.

He took part in panel discussions at the Financial University under the Government of the Russian Federation (Moscow). Guest lecturer at the Yale University and Hastings College (USA).

March-April 2003: advanced training at the HSE University, course “Fundamentals in public service in the Russian Federation”. 2003: internship in Spain in EOI Business School, Madrid, under the Presidential Advanced Training Program for Public Officers.

5 monographs, more than 100 scientific publications and articles. One successfully approved PhD thesis under the scientific supervision of O.I. Kalinsky.

The course at Openedu.ru: “Economic theory for non-economic fields of study”.

He is a member of the executive candidate pool under the auspices of Russian President V.V. Putin.

He is the deputy chief editor of the Russian Journal of Industrial Economics.

On February 18, 2014, Oleg was approved as a member of the fifth composition of the Public Chamber of Russia to the order of Russian President V.V. Putin.