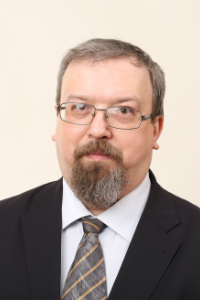 PhD in physics and mathematics, associate professor at the Department of Physical Materials Science

PhD in physics and mathematics, associate professor at the Department of Physical Materials Science

senior researcher, Institute of Problems of the Microelectronics Technology of the Russian Academy of Sciences (Chernogolovka).

assistant at the Department of Physical Materials Science, MISIS.

assistant at the Department Metallography, MISIS.

trainee teacher at the Department of Metallography, MISIS.

1998: defense of the thesis for the degree of PhD in physics and mathematics majoring in 01.04.07 “Solid state physics” on the topic “Special aspects of the formation of the high-coercive state of alloys based on Fe-Cr-15%Co-3%Mo” (supervisor, consulting professor, PhD in engineering V.I. Sumin).

1994: graduation from the Moscow State Institute of Steel and Alloys (Technological University) in the specialty “physics of metals” and with the qualification of metallurgical engineer.

The formation of two types of high-coercive state nanostructures during the decomposition of a high-temperature alpha-solid solution was revealed, which leads to a number of anomalies in the physical properties of Fe-Cr-Co alloys, both ternary and alloyed with vanadium, molybdenum, tungsten and copper.

Number of articles on Scopus — 14.